Happy new year, everyone! I hope you all had a relaxing and playful holiday season. Today is back to work for most....and for most that means hitting the ground running.

Looking back on it all, I was kinda depressed over the holiday season due to all the personal issues going on, however I did end up having some great playtime with a couple of new great guys and an awesome birthday blowout with my regular buddy in addition to some nice times with friends and lots to eat and drink over the period. 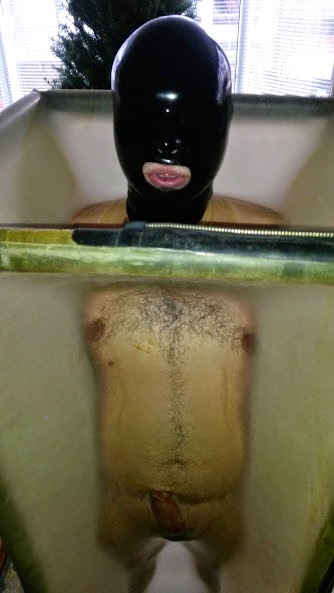 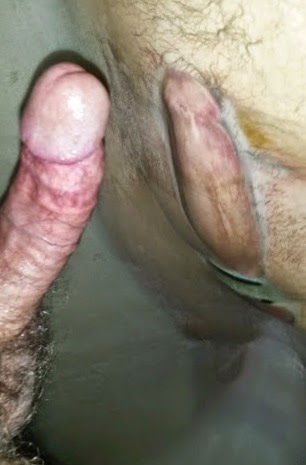 He surprised me with a bedful of big ass toys and a birthday cake at our Steamworks meet; he had attempted to get a couple other friends of his to join us for an orgy in the sling room we rented however that didn't work out. We had a lot of fun together, and there were a couple other guys that he knew that came to join us for a couple hours. I got triple-fisted by these guys, Wardog got fucked by one of the guys and we tied up the young newbie while everyone jerked off. It was a lot of fun!

The afternoon of December 31 I got together for a couple of drinks with a new rubber buddy, CutelyPerverted. He is such a young, sweet, shy guy. We had a great conversation and plan to meet up again soon. We both wore rubber under our civvies to the pub. I of course took off my top so everyone could see my rubber; he thought that was quite impressive haha

I actually wore the Regulation London skin outfit and wore it out for the rest of the New Year's evening. Tragedy struck just before midnight when the OTHER half of the ass in the skin jeans split (if you recall, I had to get the pocket on the right side repaired extensively after popping it at Northwest Puppy Weekend). They are kinda extensively ripped; I may just send them back to Regulation London and buy a replacement pair since I really really do love the pants.

Luckily I had my coverage trackpants to cover up my exposed asscheek but it kinda put a damper on the remainder of the evening. I was home before 1am that night.

On January 2nd I had a new playmate join me at the condo. Rbrgear and I have been talking for a long time about getting together. There was a lot of anxiety in the air....we have found out over time that we share a LOT of common interests revolving around rubber, bondage and breathplay. He came over Friday afternoon and I immediately put him in sleepsack bondage with electro, nipple suckers and the breathcontrol hood. He was in there for a least a couple hours while Mr. P and I edged him mercilessly. He said afterwards that he was in pure ecstasy in the tight rubber bondage. I then proceeded to put him in the vac-tower for a few hours, which he also enjoyed immensely. He ended up in the sling, bound up in the straightjacket where I played with his ass and fucked him, then we switched roles and he worked on my ass and fucked me. This went on for another couple of hours.

The entire session lasted almost ten hours and it simply flew by. We were both very happy with the outcomes of the session and I think barring any big issues we will be getting together regularly to play. He's a very sexy and decent guy - I'm excited about the future possibilities! We are already scheming out our future sessions ;)

I am re-rigging all my gasmasks and hosing circuits to build another rebreather and a double-line circuit for us to play with the next time he's over. 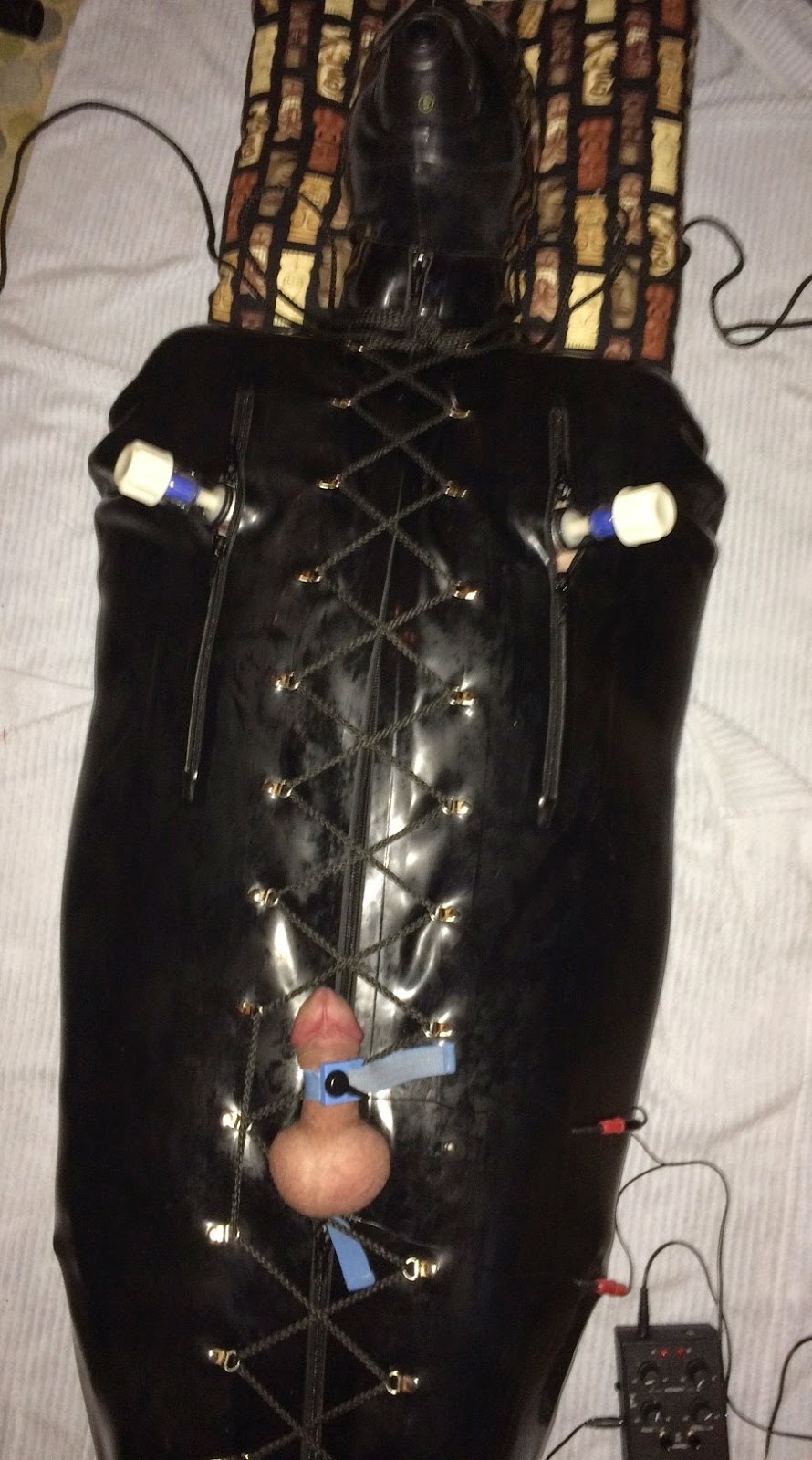 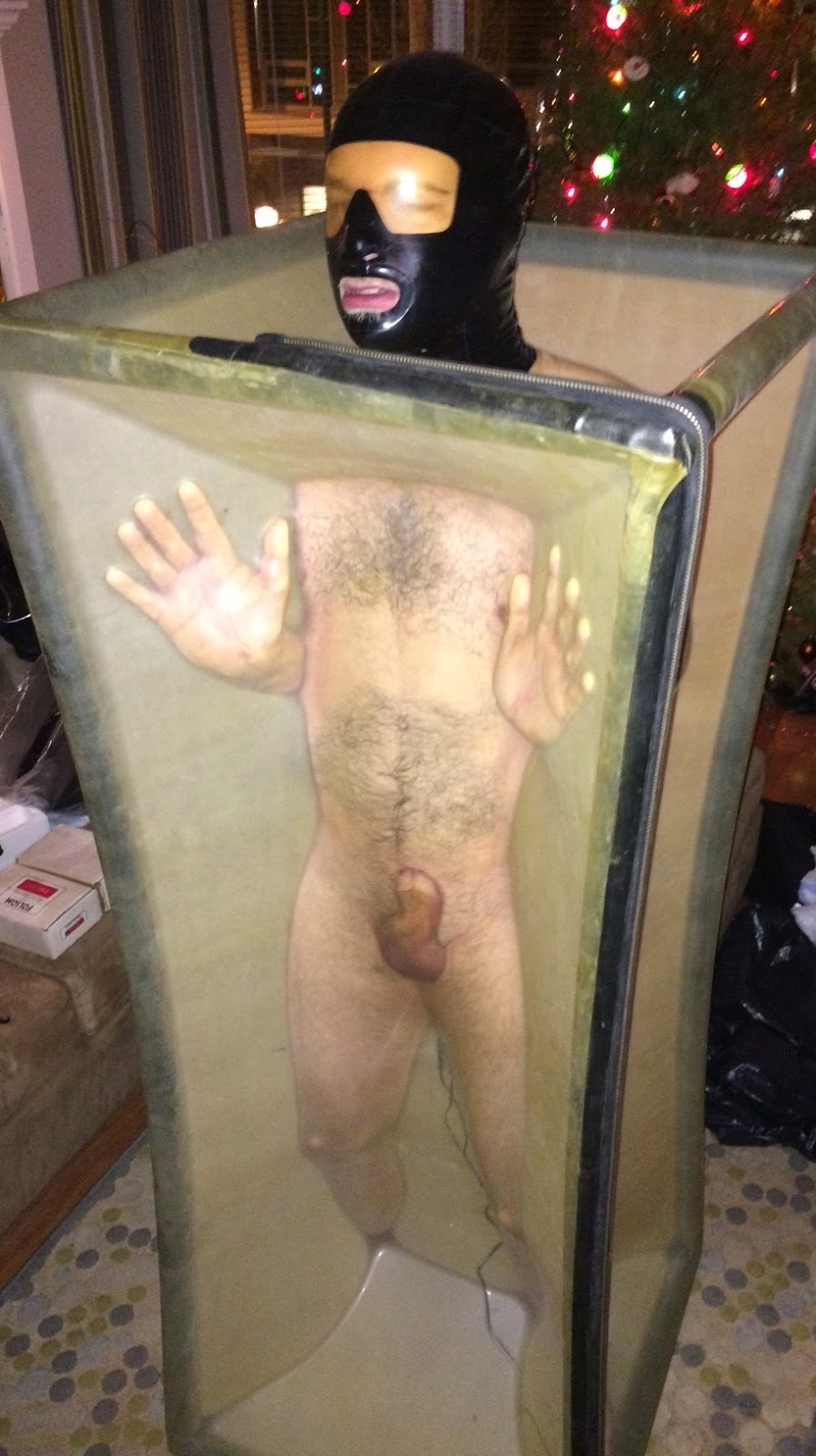 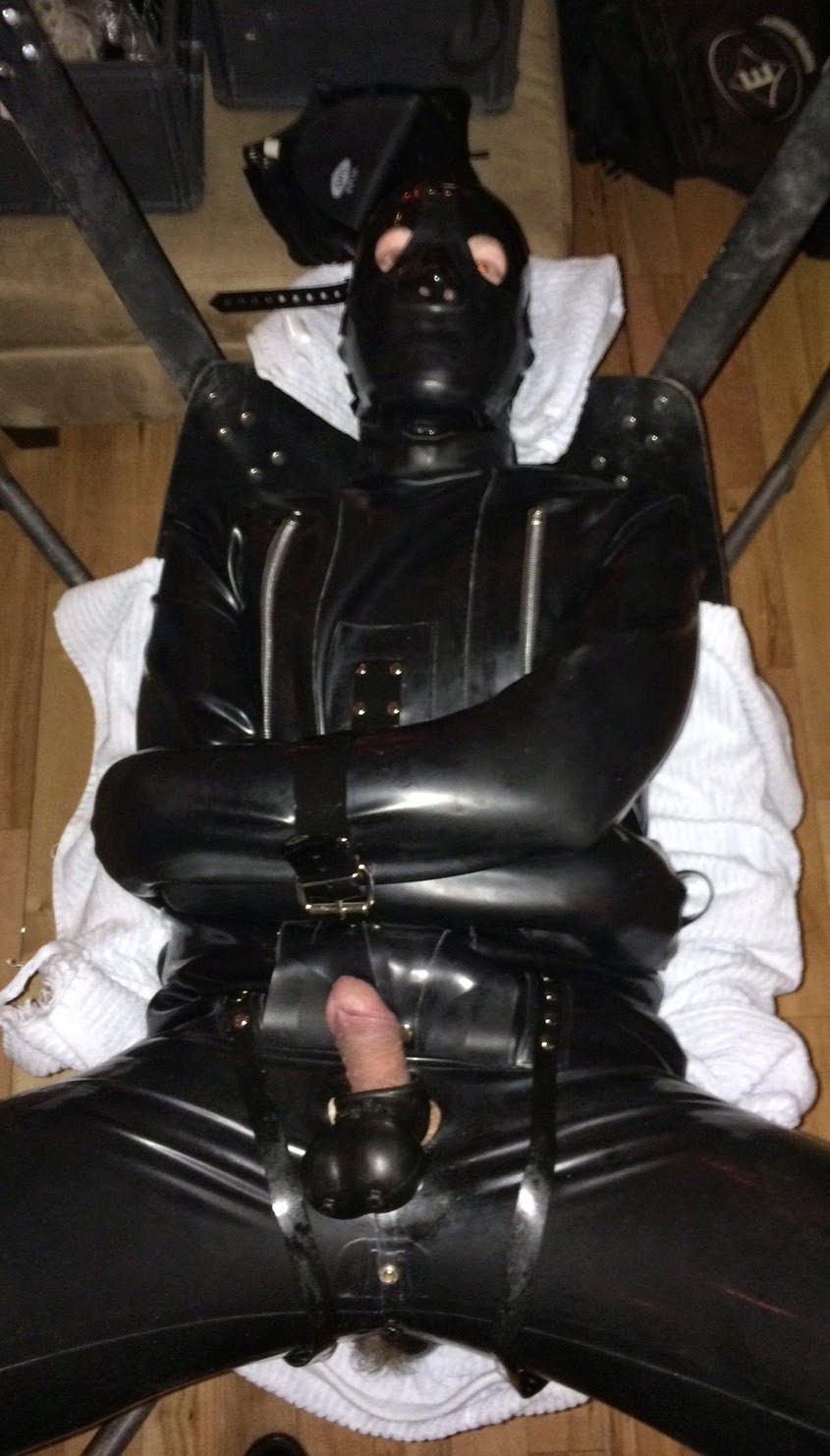 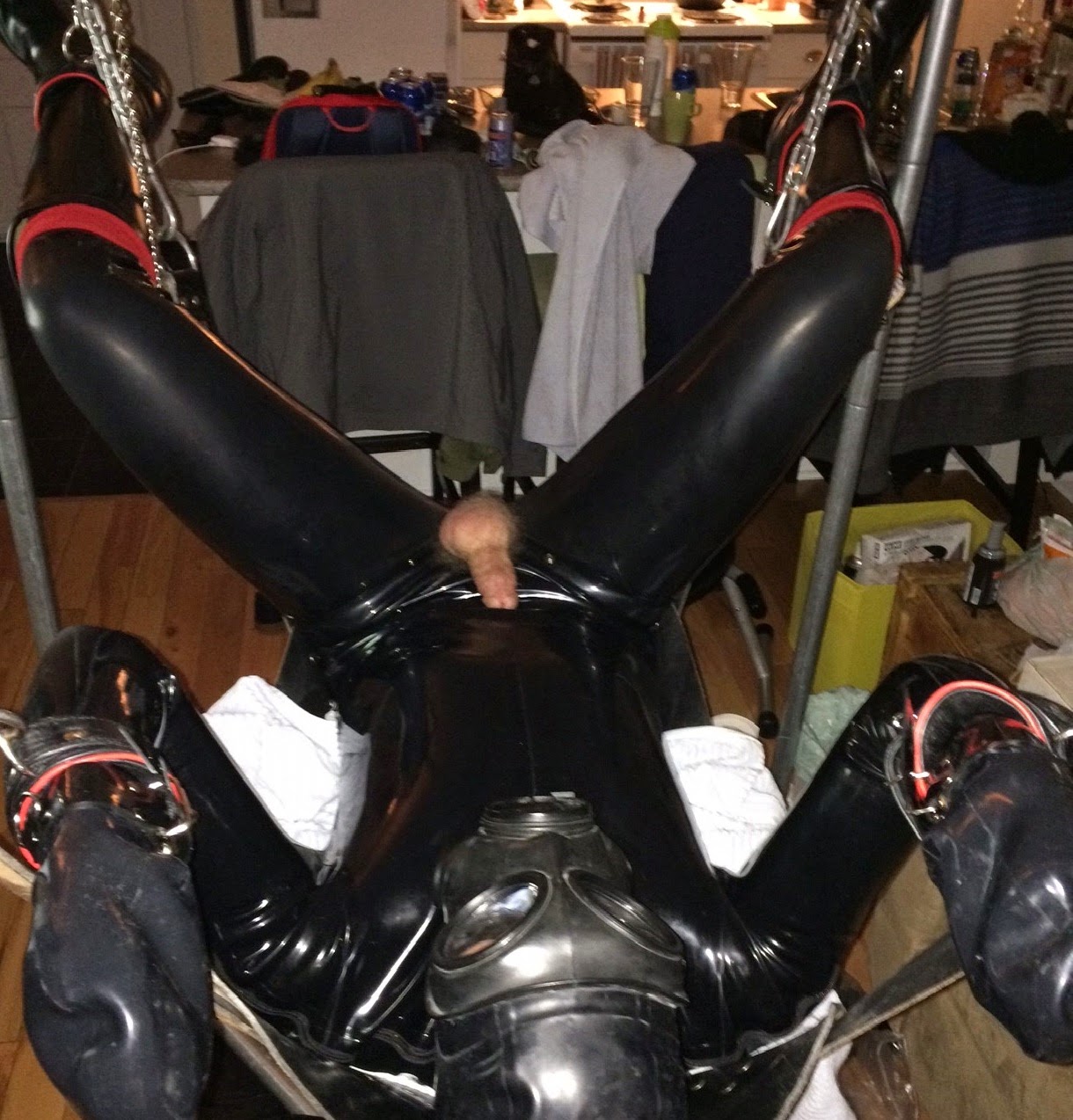 I have found it a challenge since M left my scene for RelationshipTown to find someone to fill the void of an ultimate play buddy - a good looking guy close to my size that is pervy for rubber, assplay, bondage, breathcontrol, pissplay and keen to explore and experience so much more. Here's hoping that Rbrgear will want to stick around for awhile and build a play/mentoring/exploring relationship with me.

Tomorrow night is my next playnight with Wardog. We have been going to the baths for the past month or so since Mr. P is home and usually not too participatory so we just go somewhere else, I really don't mind this arrangement except that I don't have my arsenal of toys and gear at the ready, however we will eventually get back to playing in the condo again, most likely when Mr. P is past his therapy and healed. I do like the fact that as Wardog and I get more familiarized with our surroundings, we have the option of asking other guys to join us or not, and it is all controlled by us.

CutelyPerverted and I may try to get together on Sunday; we'll see how the schedules work out. I really want to get him in some serious rubber bondage - it is something that he is completely craving and something I am only happy to oblige.

Tuchus and Cumpigcub are hopefully going to have a rubber party at their place while Tuchus is on his annual vacation from work. That will undoubtedly be a hoot of a time and I'm looking forward to joining in the fun.