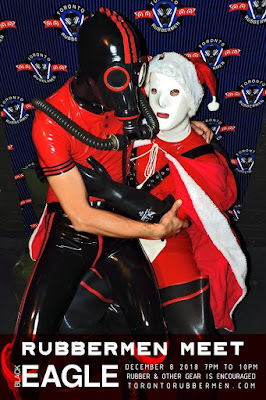 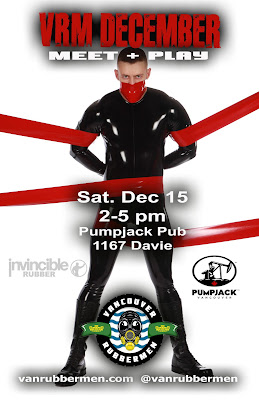 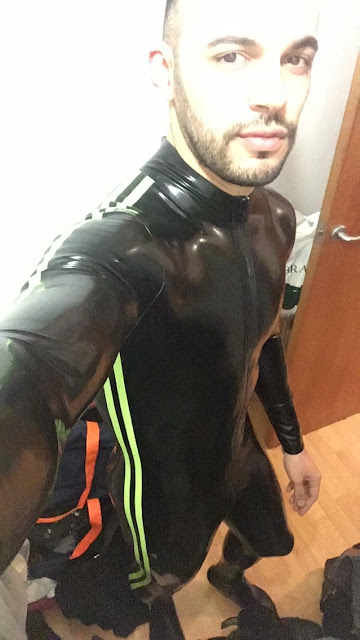 A rampant consumer holiday like Black Friday couldn't be more appropriate for a subculture than for the rubber subculture. I'm sure you've all been having your inboxes pile up with offers from rubber retailers from all over the world. Are you considering taking the plunge and getting some new shiny stuff in time for the holidays?

Invincible Rubber is offering 10% off this weekend 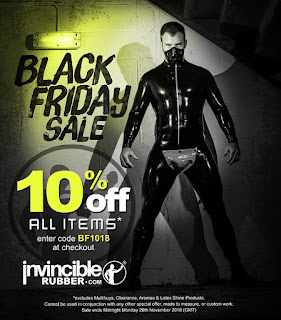 E7 is offering 15% off this weekend 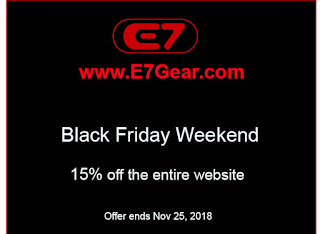 And Libidex is offering a stunning 30% off, with an additional 5% off on anything BLACK! 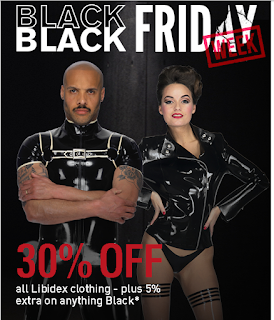 Check it all out, boys! Let me know what you decided to get, if anything. 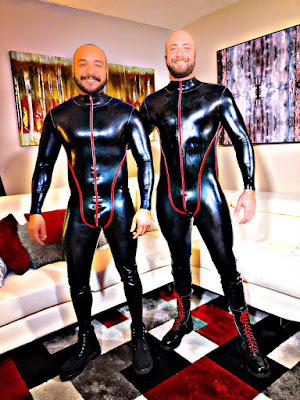 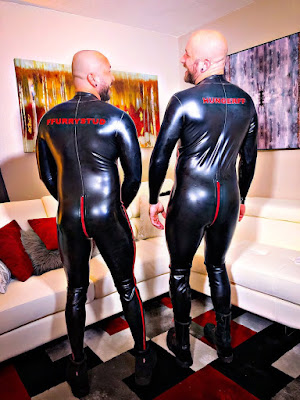 The inevitable was shot and uploaded to their FansOnly page....for now, all we have is a still appreciation... 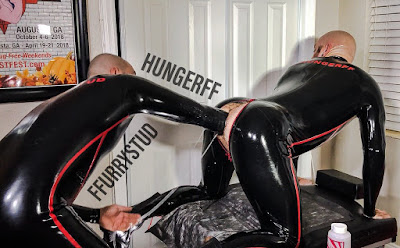 The Holidays are Upon Us...

Hoping to bring out some treats and special stuff for the boys at the Meet in December :) 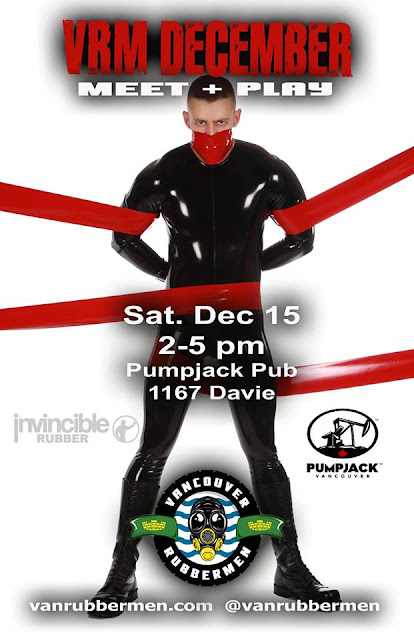 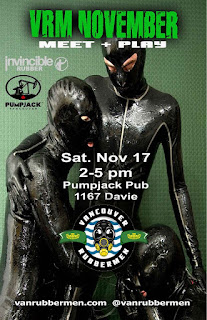 I am grateful for another great turnout of the rubber pervs to the November meet, which we held at Pumpjack on Saturday afternoon. Great fun was had by all; we managed to get five or six guys measured, made over $100 in the 'Save the Cube' fund, did my first official announcements as 'club president', prepped everyone for some additional fun at the December meet, and as I learned later, I was told there were at least five orgasms in the vac-tower and the vac-bed during the afternoon. I only witnessed one of them....the last one and apparently the most vigorous one LOL. I always find it entertaining to find out the equipment has been used so well when I'm busy doing other things!

I have such a great set of friends - they have been my biggest supporters, and now take on some of the responsibilities of running the equipment during the meets and giving me assistance with some of the other stuff going on....and then we go home afterwards and fuck in rubber! How better could it be?

Even at the end of the meet, as I was talking to one of the new and curious guys that showed up outside, when I got back into the meet area, the guys had everything disassembled and ready to pack up. Marvellous!

Here is a pic of the Saturday crew (can you believe I actually got the cats herded long enough for this?): 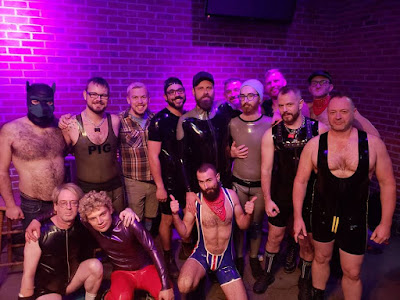 Also, this weekend coming up is the RUFF Burlesque show at the Penthouse. There are supposedly going to be performances by some of the RUFF guys and some additional professional performances. It is also going to be the unveiling of the 2019 RUFF calendar. You can see the calendar here.

I'll be honest, the calendar is pretty vanilla, and then there are the rubber guys! Our pics are definitely the most interesting ones! 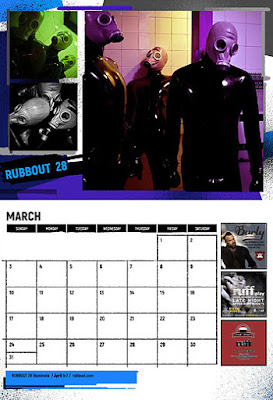 We need to tremendously thank Michel and the team at MNEvents for the Rubbout bump, putting Rubbout 28 front-and-center in the middle of the calendar next year.
Posted by MB at 10:53 AM No comments: 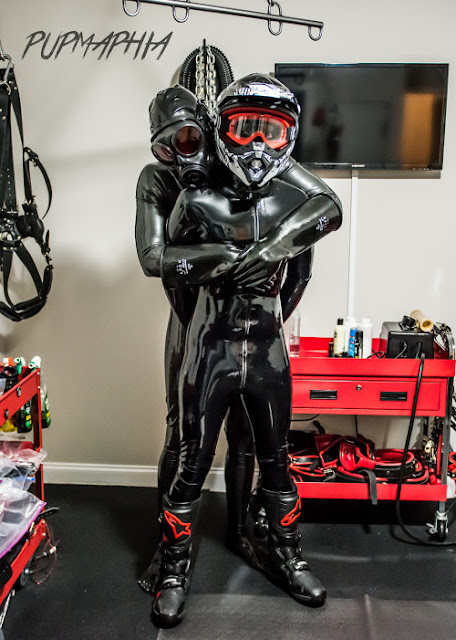 Q: I knew my little brother had an odd fascination with rubber that would likely become sexual. He would steal rubber gloves and hide them in his room, and there was a huge meltdown when our mother found a gas mask in his room when he was 12. My brother is in his 30s now and has a closet full of rubber "gear" that he dresses in pretty much exclusively. (When he's not at work, he's in rubber.) All of his friends are rubber fetishists. When he travels, it's only to fetish events where he can wear his rubber clothing publicly. He will date only other rubber fetishists, which seems to have severely limited his romantic prospects, and he posts photos of himself in rubber to his social media accounts. I read your column, and I understand that kinks aren't chosen and they can be incorporated into a person's sex life in a healthy way. But my brother's interest in rubber seems obsessive. Your thoughts? —Rubbered Up Baby Brother's Erotic Rut


A: If your brother was obsessed with surfing or snowboarding and built his life around chasing waves or powder—and would date only people who shared his passion—you wouldn't have written me. Same goes if he were obsessed with pro sports, as so many straight men are, or Broadway shows, as so many gay men are. The only "problem" here is that your brother's obsession makes his dick hard—and to be clear, RUBBER, the problem is yours, not his. An erotic obsession or passion is just as legitimate as a nonerotic one. And even if I thought your brother had a problem—and I do not—nothing I wrote here would result in him liking his rubber clothes, rubber buddies, or rubber fetish events any less. 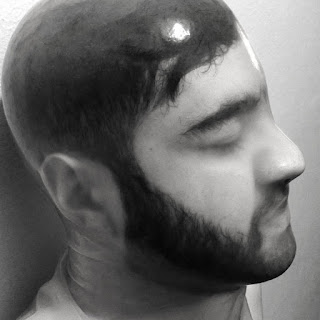 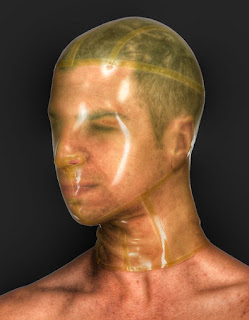 Newest obsession for 100% rubberized object:
🖤3 layers of rubbery tightness all over
🔐Locked in chastity
⚡️Electro sound for some heavenly CBT edging
🤖 Gimp charges best through it's shiny cock, ball & hole
🤤Edged all day like this
💧Then came the mess pic.twitter.com/npAEiiMjqz
— S T R U G G L E G U M M I (@StruggleGummi) November 13, 2018

In Defense of Chastity

For you that don't know, I'm a big fan of 'sessional chastity'....putting something some coverage to immobilize my cock while my ass becomes my primary sex organ. It's a very submissive thing to do, to give up your prime sense of masculine identity to focus on something else you have the potential to enjoy and become very proficient at. I think chastity is wonderful, though I have yet to find prolonged chastity a personal goal. Perhaps if I found the right Dom top to satisfy me enough to assume such a role.

To sum up the joys of chastity, here is a conversation on Tumblr a few weeks ago that really resonated with me, that I would like to share here. A very complete answer to that question. I love the entire response.

It was found on Confessions of a Hooded Bondage Bottom's Tumblr Feed:

anonymous asked:
I don’t understand the point of locking up. What does this do? Why is this attractive? Not trying to judge but trying to understand why the gusto for “caging” a dick.

And most importantly, I love chastity because it sets clear roles. The boy is giving up his masculinity for me, he locks it up as a sign of surrender. My dick becomes the only dick in the room and he’s just holes. I’m his Man, he’s my bitch. Fucking a boy while watching his soft clit in his cage being ignored is just very, very hot.
I never liked when my bottoms touched themselves during sex. I thought the chastity devices looked a little weird at first. But now I love them. If I see one on a boy it makes me hard instantly. Because that means that he embraced his role as someone who belongs underneath Men. And I love being on top!

Wow, I can't even begin to describe how many buttons the two different versions of Dmiitri's latest works push in me. Gorgeous illustrations of a gorgeous scene.

Posters are out for Antwerp Pride and the Dutch Rubber Weekend in 2019! 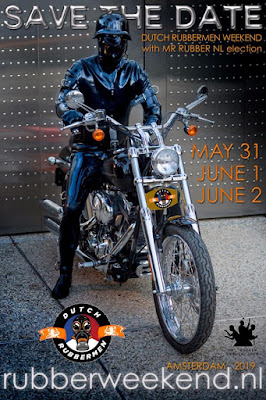 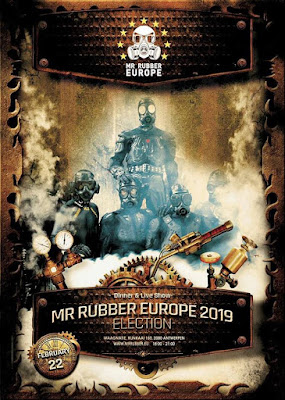 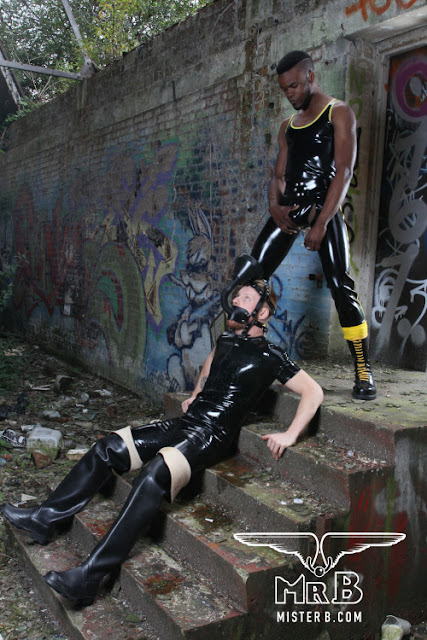 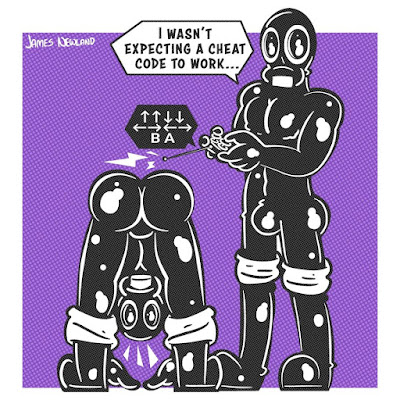 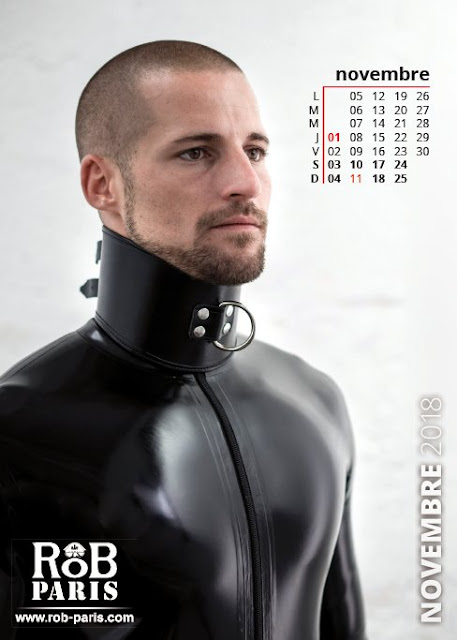 These suits and this gear with just the right subtle hints of transparency attached or layered over or under black latex really do tell a different story.....these looks (and especially the sheaths sheaths SHEATHS) drive me wild!