I march one symbolic day closer to my demise today...I'm still painfully waiting for the Spexter fullsuit to show up. I hoped it would have shown up this week, however with the holiday package shipping season nightmares it probably won't show up until next week or the week after. I emailed Michael at Spexter a few weeks ago to find out what the status of the suit was; he said it had been completed, packaged and sent on December 19. It is only a matter of time until it shows up here in Canada. Once it arrives it will make for the best birthday present ever! As soon as I get it, I will have pics to share.
Posted by MB at 9:01 AM No comments: 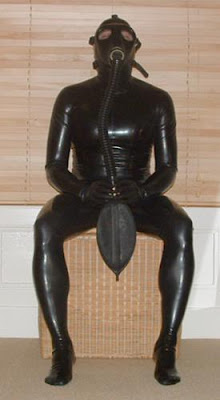 Rubberlike those legs!
Posted by MB at 12:46 PM No comments:

My friend Higher Lycra in Northern BC is a young lycra and zentai fan just getting into latex. The similarities between our discovery and growth in lycra and latex fetishism is uncanny.

I'm trying to give him sage advice on how to get into latex fetishism by balancing cost with quality. He's a cute hottie just getting into it and I'd hate to see him be disappointed with his first purchases. But then, when you're into skintight coverage as much as I know he is, I know he'll persevere! The pull into continual skintight coverage is too strong! Have a rubbery Ramadan, kinky Kwanzaa, or whatever your flavor!
Posted by MB at 12:16 AM No comments: 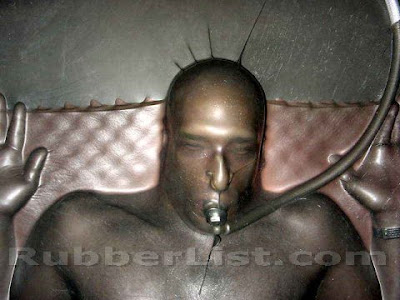 China's embattled toy industry may be facing cutbacks and factory closings but the country's sex toy sector is booming, according to vendors at an adult trade show in Macao.

More than 3,500 toy factories — representing 52 per cent of the companies that make toys for children — have gone bankrupt as China's manufacturing industry struggles to improve its image following a series of massive worldwide product recalls.

But none of China's 400 adult toy companies — which produce more than 70 per cent of the world's sex toys — has shut down operations. The sex toy industry is valued at $7 billion.

Chris Shaw, a spokesman for Empowered Products which sells personal lubricant, says his industry is not suffering like others are in the economic downturn.

"For our kind of products — if people are not going on vacation, if they're staying home, if they're trying to find other things to do to entertain themselves versus spending money — people are buying sex products and lubricants because that's an easy, cheap way for them to have maybe like a staycation and enjoy themselves like a couple would," Shaw told CBC News' Anthony Germain.

Similarly, LECO Health Equipment reports that they're continuing to sell their sex toy products to companies in Europe and the U.S.

"Our customers, our distributors in other countries tell me that the sex industry is not influenced by the economical problem," said Li, a LECO representative.

Oscar Hainer, a representative with the Dutch-based Shotz Media, said demand has largely been spurred by a growing acceptance of sex toys in western markets.

"Maybe it's started in Holland, I don't know, but we are trying to spread that all over the world, so Canada be ready," he said.

The same goes for Chinese-produced sheet latex, which apparently is improving in quality all the time and may eventually rival the European-manufactured stuff.

But as some on the boards said, when it comes to sex toys and materials, you should pay more for quality and forego 'cheap'. I would not think buying sex aids in a Wal-martized scenario would be a good thing?!?!? Maybe that's already the way it is. You see some of the crap on the shelves in sex shops these days?
Posted by MB at 12:08 PM No comments: 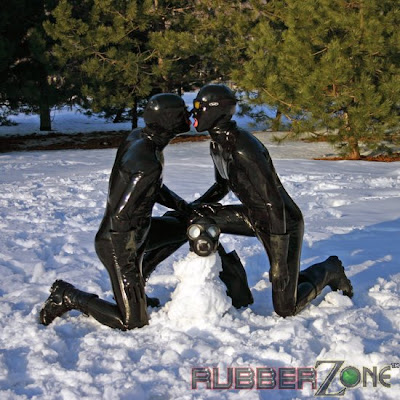 Brr...it's been -30C across all of Western Canada for the past week; it's a horrible time of year when staying inside is preferable, maybe even self-preserving. The days are short and if you go outside, you need to be buried in four layers of clothes (or you die). Great place to live, eh? Oh well.

I'm inspired by all the snow we've received in the past few weeks to get outside once the weather warms up for a photoshoot in the white latex. I'd like to see that idea come to fruition before the snow melts again because what we have right now is still pretty pristine. A few days of warm chinook weather will turn it all to slop.

I'm still waiting for the new Spexter suit to show up but I've been jumping into all of my other latex in the meantime. The black STR catsuit is showing the stress of all the play sessions it gets. I've had to patch the armpits and equal places on either seam across the back in the past few weeks. I hope that's all that breaks down on that suit for awhile. I'm sure once the Spexter suit shows up, all the other latex will get a break!
Posted by MB at 9:27 PM 2 comments: Rubbercatsuits.co.uk is offering a prize draw for a catsuit if you complete the entry form and answer the ridiculously-easy question. Enter now!
Posted by MB at 6:50 PM 1 comment: 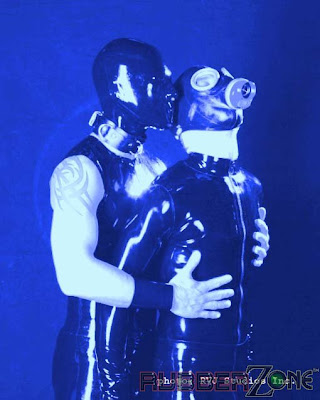 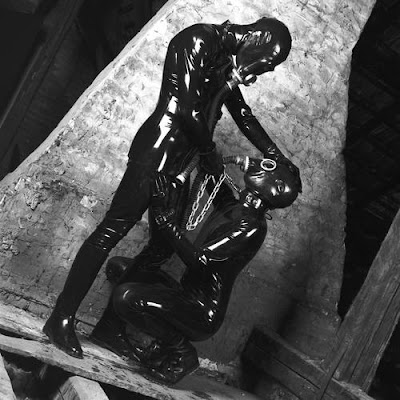 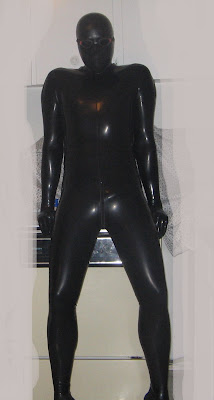 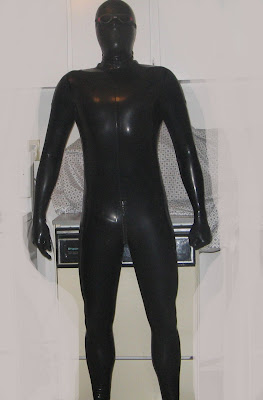 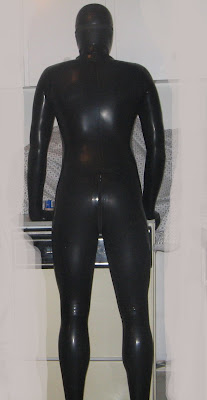 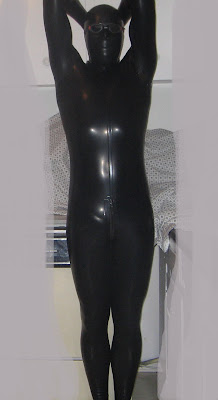 A big hard-on in the next video! This was a great bc session with only nostril holes open to the outside.
Posted by MB at 8:55 PM 2 comments:

Mmm...inflatable rubber bondage would be a trip. My friend Collector2 just bought a blow-up bondage ball that he's planning to bring to the Mr. Rubber Calgary competition next year. I hope to get to his place to try it out sometime this winter.

In the meantime, here's a great bondage scene by the incomparable Kerotan and his friend.

Meh...not much going on this week. It's been cold and lame here as you would expect in December, but I did get my Nune set up finally! Woo-hoo! Days and days of non-stop music.

I managed to work from home for the entire week which was great. I got to miss the weather outside plus I got to work in rubber for a couple of those days. The new position I'm planning to take in January will be full-time work from home, so I figure I'll be able to wear latex all day even that much more! How lucky am I?

A couple of friends and I are going out in rubber tonight. It is supposed to be the monthly fetish night at the Eagle tonight, however it wasn't mentioned on their events calendar. Oh well...we'll make it into a fetish night regardless...

I guess the biggest news recently would be the fact that Ning is shutting down all sites on the network deemed 'sexually explicit' at the end of the year...quel surprise. The guys at Guyzingear and MaletoMaleBreathControl are doing their damnedest to remove themselves from the Ning Network by getting all the site profiles and pics moved to new servers and new locations, but they require some financial assistance to get this done. If you have a chance, go over to the sites and drop some cash.

Sites such as Gayskins, Gaybondage, Slickstimulations and Rubber Fetish World are presumably staying on Ning therefore are changing their submission process in addition to removing any material deemed explicit by the new guidelines they have been given.

They all provide a great service -- a few of the few good ones currently left with no picture restrictions and some fantastic content. It would be a shame to lose them, so support their fantastic efforts!

I guess this means all the embedded vids here are going to have new URLs...great, more work! ;-D
Posted by MB at 4:48 PM No comments: 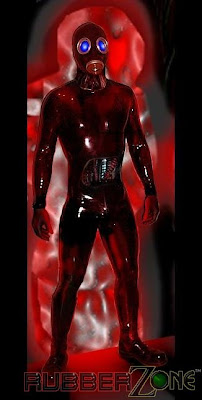